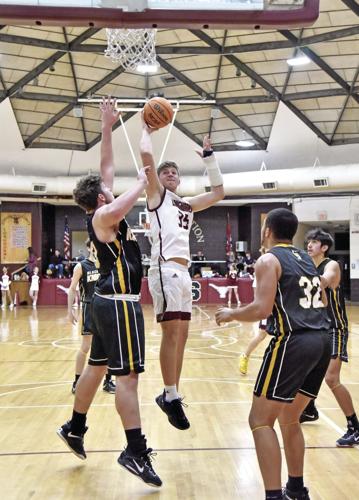 JCHS’s Connor Simcox (35) puts up 2-points in the Longhorns 64-80 loss to Chuckey Doak January 10.  Simcox, wearing a brace on his left arm, returned to action after setting out several weeks with an injury. 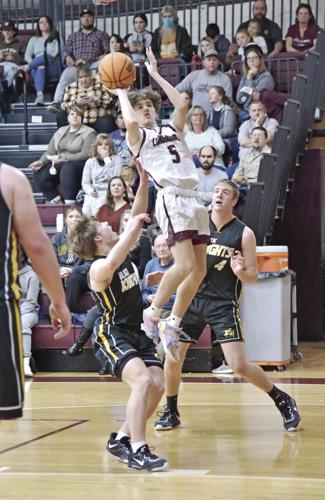 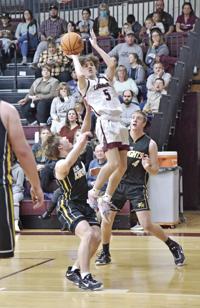 Longhorns Austin West (5) sends up a jumper in the JCHS’s 64-80 loss to Chuckey-Doak Tuesday, January 10.

JCHS’s Connor Simcox (35) puts up 2-points in the Longhorns 64-80 loss to Chuckey Doak January 10.  Simcox, wearing a brace on his left arm, returned to action after setting out several weeks with an injury.

#35 Connor Simcox returned to the starting lineup wearing a brace on his left arm after sitting out several games due to an injury. Even with one of their key players back in the line-up, the Black Knights’ size, combined with the Longhorns' unusual off-night shooting, proved to be too much to overcome.

The Black Knights’ size advantage was apparent from the beginning, with the away team winning the tip-off and grabbing three offensive boards to start the game. #35 Connor Simcox tested his brace early and often started off with an offensive rebound with no obvious pain, as well as scoring the Horns' first basket. The Longhorns would not score another basket until 2 minutes left in the first, with #34 Graham Reece hitting a three from beyond the arc. Unfortunately, that would begin another scoring drought for the home team as the first period closed out with the Black Knights leading 6-19. The 3-point shot was a dagger to the Longhorns on both sides of the ball. The Horns passed up several open shots from beyond the arc while the away team took every open three they could create.

Simcox started the second-period scoring by going up strong with the ball underneath the basket and drawing a foul. Simcox converted the foul shot cutting into the Black Knights' lead of 9-21. Chuckey-Doak continued to build their lead over Johnson County using their size and converting their shots. The Horns appeared to be more comfortable shooting and creating more shots, but the ball just would not drop for them from any range on the court. Johnson County went into halftime down 18-34.

The Horns came out of halftime with efficient ball movement that lead to #30 Dalton Robinson scoring their first points of the second half. The third period looked much like the second, with the Horns creating plenty of open looks on offense but were unable to convert the opportunities. Reece hit a timely 3-pointer coming out of a timeout to keep the Longhorns in the game with the score 33-51. The home team closed the third period with an inspired play on both sides of the ball, including two blocked shots by Simcox and the score 44-59.

The home team carried the momentum from the third into the final period, with Reece again scoring from three-point range and making it a 12-point game 47-59. The Horns were able to get within 10 points before Chuckey-Doak put the pressure on both ends of the court and began to build a healthy lead. The Longhorns would go on to lose 64-80.

Although this one hurts as it was a conference loss, Chuckey-Doak is considered to be one of the better teams across the state in Class 2a, and the Longhorns hung tough with them. The Longhorns were outsized, but with a fully healthy Simcox, and if just a few of the open shots go in, it’s a much different ball game.

Johnson County would lose to another conference opponent while playing away at South Greene on January 13. The Longhorns kept the game close until South Greene was able to pull away in the second half. Much like Chuckey-Doak, South Greene is another solid team that could make waves after the regular season.

The Longhorns have a 3-game home stand starting Monday, January 16, against non-conference foe Unaka, then host conference opponent West Greene on January 17, and finish the week off on January 20 against conference rival Happy Valley.